May 12, 2012
I am not sure that any of us really like to think of ourselves as tourists.  Tourists are, after all, those rather vacuous, annoying people who take up space on the pavement when you are trying to get to or from work, or you just need to get out of the office to grab a sandwich for lunch.  Instead you find yourself dodging all these aimless bodies as they dawdle along with all the time in the world. However, your own holiday time comes along, you climb on a plane and travel to foreign parts of the world and all of a sudden become one of those souls who just want to take time to stop and look around without the pressure of clock watching.


Well of course we are currently tourists too and we have had a busy week visiting many of the tourist attractions in Melbourne.  Here's what we did in the first part of the week.


Sunday, 6 May 2012
We went to the Sunday craft market on the esplanade in St Kilda, down by the sea.  There wasn't a huge amount which caught my eye but these hats and tea towels were quite fun! 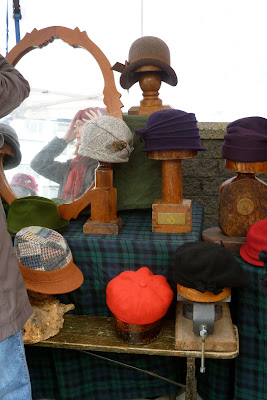 Below is Mr Moon, welcoming visitors to the delights of Luna Park, an amusement park which has been going since 1912.  It offers one of the world's oldest operating roller coaster rides - and it sounds like it too!  Wooden and rattling!  You can just see part of the track in this photo.  Not for me thank you! 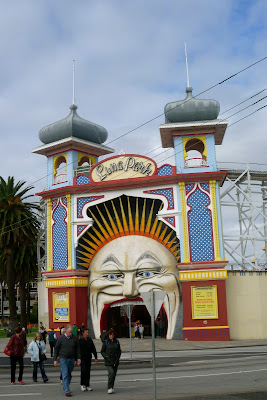 We walked along by the beach and I caught my first Australian running wave on camera!  Not very blue and sparkling but I am sure we will see some of those later in our stay!  I had to take a photo anyway, just for the record. 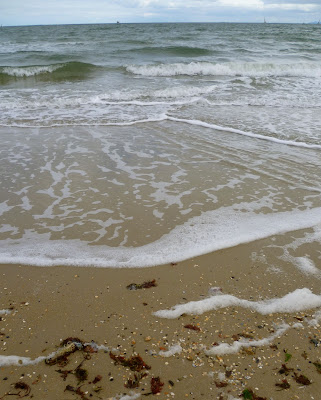 Along the sea front there were signs of the St Kilda Busking Festival - a pavement artist, a comedian, and a couple of buskers of course. 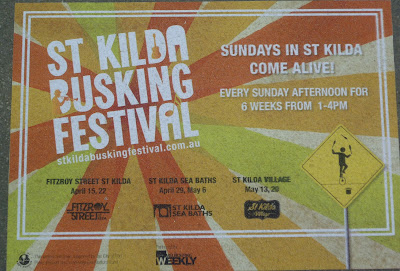 Not sure who this lady is 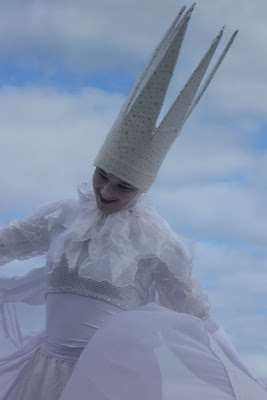 but she was awfully tall!  It's a miracle the gusting wind didn't carry her away! 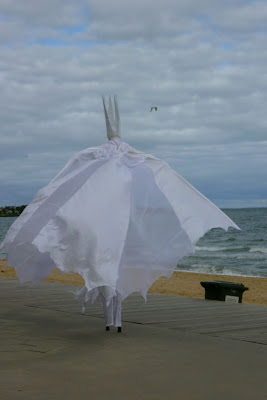 Monday, 7 May 2012
On Monday we went to the Melbourne Museum.  It's a fantastic place and there's much to see. These were my favourite bits. 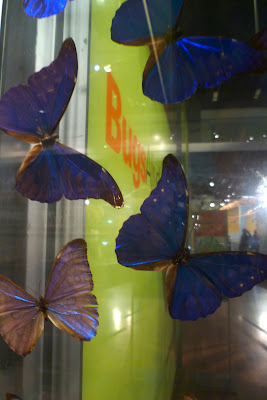 I had better qualify that - I am not that keen on bugs, but I do love butterflies. 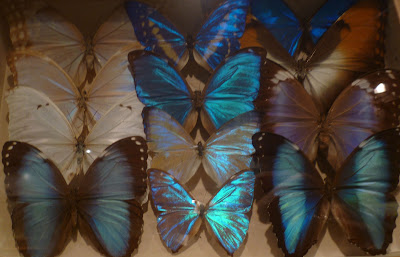 There were furry and feathery exhibits - 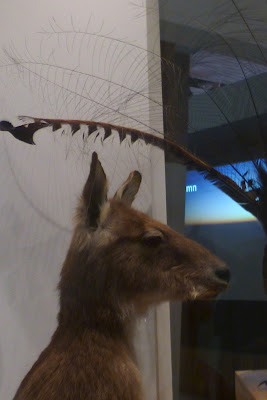 and not so furry exhibits - 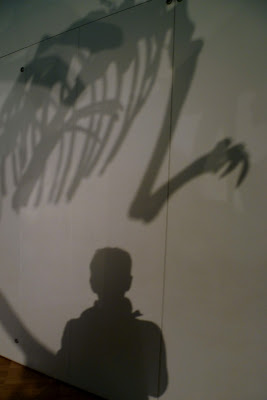 I had a bit of a lucky escape with this one!

Tuesday, 8 May 2012
Today was our first day of real Australian weather.  It was blue and beautiful all day long and we set off to visit the Royal Botanic Gardens.  First of all though we came to the Shrine of Remembrance, commemorating those Australians who fought and fell in various conflicts.  I would like to write about that visit another time but coming away from the massive structure which you can see in the background of this photo, there is a charming, tiny bronze sculpture surrounded by a hedge of rosemary for remembrance.  You can just see the trio in the first photo, totally dwarfed by the monument behind. The sculpture depicts a mother and her two children.  The boy is holding a wreath and one can only assume it's for his fallen father.  It's both touching and delightful. 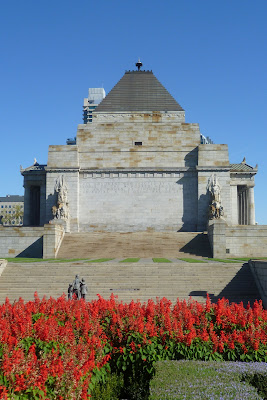 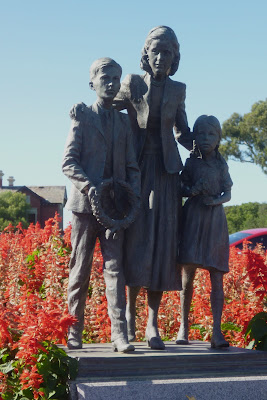 The botanical gardens are extensive and we only covered about one third of their area so there is a good reason to visit again, probably a couple of times.  There are lots of beautiful camellia bushes in Melbourne.  Most gardens seem to have them and it was news to Mr Gaucho that we have the camellia to thank for our cup of tea! 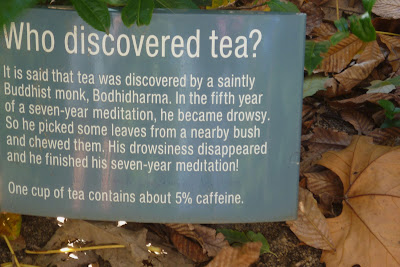 I recognised lots of plants and shrubs but of course there were some very unfamiliar specimens, especially trees of gigantic proportions and with wonderful bark, 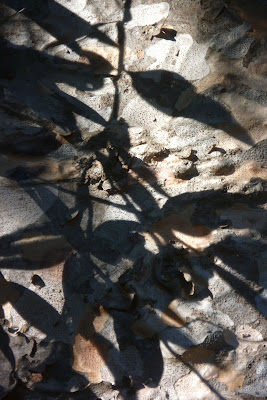 and intriguing flower forms.  This is the corkscrew flower! 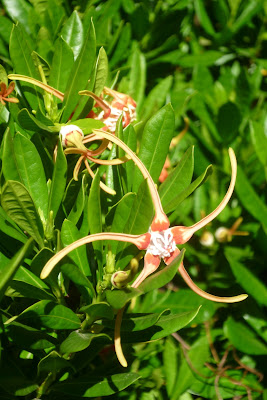 I was standing underneath these whopping great leaves and felt a bit like a Borrower. 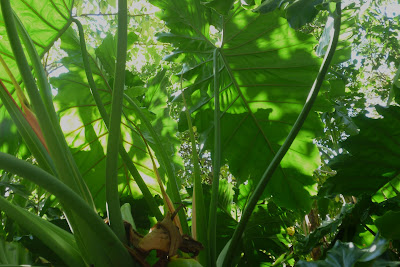 We left the gardens and walked along parallel to the Yarra River and sat in the sun for a while in Alexandra Gardens.  There is an imposing statue of Queen Victoria.  Melbourne is in the state of Victoria and there innumerable reminders of the Victorian era in this city. 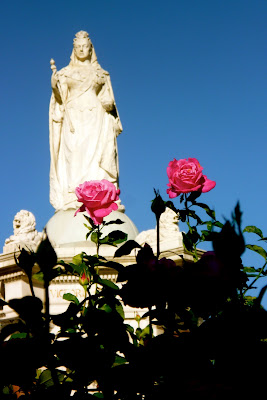 A visit to an Australian garden wouldn't be complete without a gum tree!  They are graceful and beautiful. 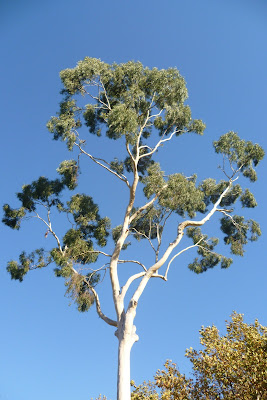 The rest of our week has been equally busy with sight seeing, but this post is long enough, so see you later!

By the way, I am very happy that people have been visiting the running wave.  Thank you for doing so and I hope you come back soon.

In celebration of my sweet peas in a vase on Monday

November 25, 2019
It is almost December and I have finally cleared away the sweet pea plants, despite a handful of flower buds at the end of two or three green vines.  No bud or fresh flower gets binned by me!  And these flowers, in particular, have been so stalwart and beautiful that I thought the very least I could do, in recognition of their performance into very late autumn, would be to give them centre stage in my vase today.