The early morning August sunshine is already tinged with gold, the first indication that we are on the cusp of moving from summer to autumn. The bright, white light of high summer has passed, and the sunlight, shining through the wood today, brings an ochre glow.  The wind is warm, blowing hard from the west, funneled along the drive by the woodland on either side.  The treetops sway, and a few dead leaves fly through the air, landing on the green bracken below.

As we reach the edge of the wood, we pass a tangle of apple mint, rosebay willowherb, and a mixture of grasses.  A white convolvulus winds its way up the sturdy stem of hogweed, and its trumpet flowers look up to greet the sun.  The soft downy leaves of the mint are beginning to yellow, and a pale lavender-coloured flowerhead is forming at the top of each stem.  The false oat grass has turned to straw, the sunshine gleaming like white gold on the slender strands.  The stems of rosebay willowherb are garnet red as they reach the fuschia pink flowers, at the top of each spire, a vibrant patch of colour.  In the background, a small rowan tree has clusters of scarlet berries, which contrast brightly against the dull, dark green of the August wood. 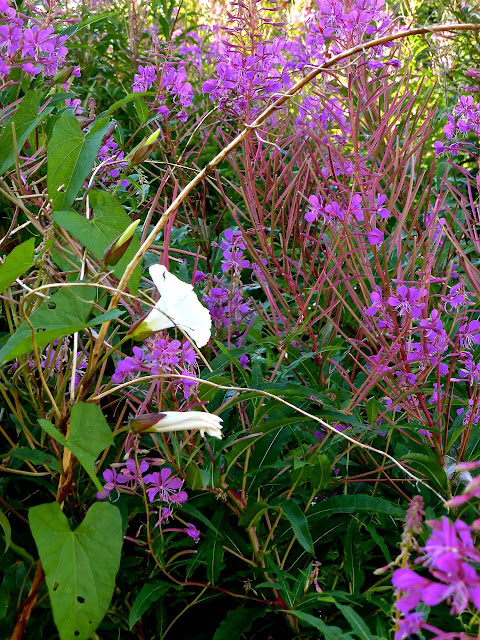 A cottage stands on the left-hand side of the drive.  The garden drifts off into the neighbouring field.  It is bordered by a hedge of hawthorn, hazel, field maple and briar rose, which, although it is no longer flowering, gives off a sweet scent of apples.  Across the drive from the cottage, next to an old stone outbuilding, a dead mole lies on the grass.  Its tiny blind eyes are closed, and the business-like claws, perfectly designed for excavation, are still;  its dark chocolate brown velvet coat is unblemished.

We walk on.  The slanting sunlight hits an arching stem of blackberry, illuminating the leaves, which are beginning to take on the crimson hues of autumn.  The berries are not yet ripe but, in a few weeks, there will be plenty of fruit to share between the birds and the jam-maker.  This year the wood has yielded an abundance of wild raspberries and blackcurrants.  There has been plenty of rain to swell the berries, and enough hot sunshine to give them depth of flavour and sweetness.

Since late spring, the undergrowth has grown shoulder-high.  Stinging nettles, bracken, grasses and brambles have created an impenetrable thicket on either side of the driveway.  The creatures that move through this landscape have made their own corridors, along which they can travel with ease.  Standing in the middle of the track and looking to the right, there is a very narrow pathway, stretching away into a field.  To the left, continuing on the same line, the animal highway is clearly defined, through a narrow band of trees, into the field beyond.

For a few yards, we walk along the John Muir Way.  It is a well-known and constantly trodden route, named after a local boy who became the world’s first, true conservationist.  We turn off the track, through a wide opening to the left, into a field.  A cereal crop is growing here, not yet ready for harvest, but the farmer has cut a wide margin around the edge of the field.  It is open and grassy, perfect for walking.  Overhead, a few seagulls cry, as they fly back towards the coast.

A burn runs along the north side of the field.  Fifty years ago it ran clean and clear, a habitat for brown trout and all sorts of water life.  Nowadays, the stream is neglected.  The steep banks are overgrown, and the watercourse reduced. The long, leggy stems of great willowherb vie for position with the creeping thistle, and the cock’s-foot and false oat grasses wave in the wind.  When I was a child, I knew the great willowherb as cherry pie, because of its gaily coloured magenta flowers.  Many of the creeping thistle flowerheads have gone to seed.  They are the softest brown, the colour and texture of baby rabbit fur.  Once the individual seeds have ripened, the thistledown explodes, creating a halo at the top of each stem, until the wind comes and blows each feathery pappus away, to start a new life elsewhere. 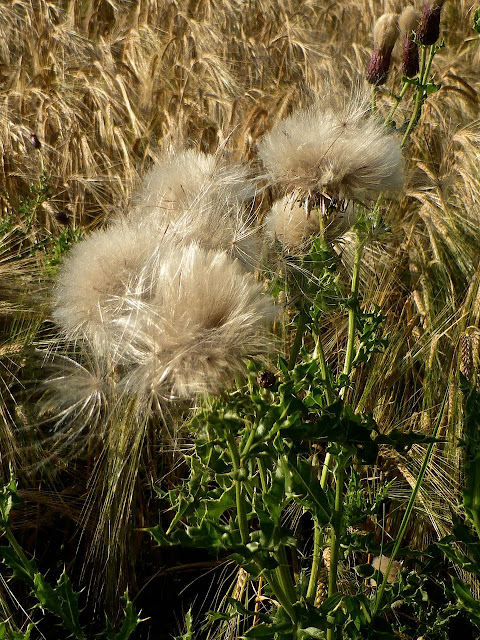 In an elderberry bush, along the field margin, there is a large and immaculately engineered wasps’ nest.  It is dark grey, faceted, and slightly sinister.  There are also a few crab apple trees growing along the edge of the burn.  In the spring their blossom was perfect, pink and white, smelling cool and sweet.  Now, the young apples are beginning to show a little rosy hue, which belies the sharpness of the hard, unripe fruit.  It will be some time before they turn to a rich yellow, and drop from the trees into the stream below.  The windfalls become corralled by debris in the water.  The current jostles them and they bob about on the surface.  Once there has been a rainstorm, and the stream swells, they will be swept away downstream.

The field is bordered on two sides by woodland.  It is a field of barley, shining, a lustrous burnished gold in the early morning sun.  Each ear has long, fine whiskers and the stems point in different directions, giving the field the texture of tousled fur.  As the wind blows across the acreage, the crop ripples, undulating and glistening.  The ears are not yet ripe.  There are streaks of apple green running through the gold.  As we reach the north-east corner, a buzzard lifts off from the branch of an oak tree, languidly flapping its wings, veering away to soar above the cornfield, on the other side of the burn.

I pause to watch a flight of swallows, as they swoop and skim over the surface of the barley. They are catching the insects hovering just above the crop - an aerial display of breathtaking skill.  They fly at high speed, twisting and turning, the sun glinting off the iridescent navy blue plumage on their backs.  Their underside is a soft grey, and as they pass, I can glimpse the red flash under their heads.

As I watch the birds, I become aware that we are, in turn, being watched.  Just ahead I see two alert ears and the soft eyes of a young roe deer, standing in the crop.  It is staring at us intently, surprisingly unafraid of me, or my dog.  We look at each other for a few moments, and then I realize that a short distance ahead of us, hunkered down in the grass, there is a hare.  The deer decides to bound away, leaping through the barley, and then out on to the field margin, beyond the hare, who is still lying low.  The deer stops and looks back at us, quizzically.  It takes a few steps towards us, and then a few more.  It is a young creature and not yet fully aware that many humans and dogs are not to be trusted.  Then, its innate sense of self-preservation kicks in, and it bounds off into the woodland.  In the meantime, the hare has realized that we are close by, and starts up, long black-edged ears upright and twitching, round hazel brown eyes, bright and keen.  He turns and runs, helter skelter down the field, his long hind legs giving speed and power for his getaway.  In a few seconds, the brown hare has covered the length of the field, and is away into the ripening crop of linseed, on the other side of the track. 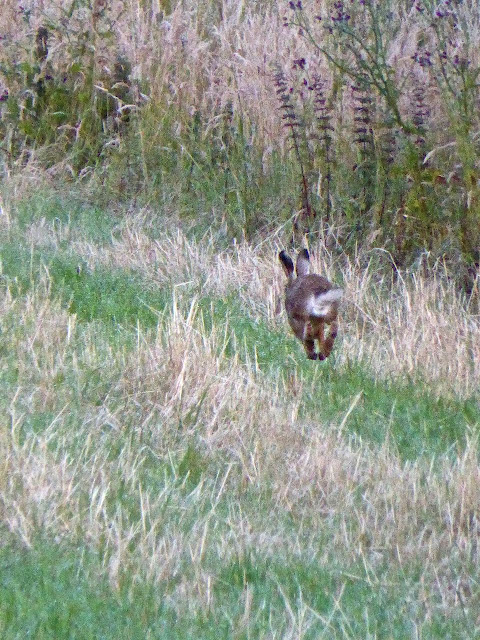 We leave the field and walk back down the drive, heading for home. The sun has warmed the air.  We pass a wide stretch of mayflower and chamomile, which is releasing its very particular, summery smell.  In amongst the mayflower there are a few poppies, bright red pinpricks of colour.  Overhead, I can hear a buzzard, mewing, as it carries out its reconnaissance along the edge of the wood.

The August landscape is predominantly dark green and pale straw of the harvest.  As the month progresses, the tawny colours of late summer will begin to add some contrast and variety.  In the meantime, the towering stems of the bracken, stinging nettles, a few elderberry bushes and raspberry canes, bordering the drive in a deep thicket, are just beginning to look a little tired, as their summer approaches its end.